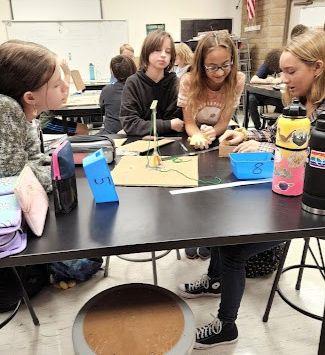 The first quarter GEM classes at Tortolita have accomplished a lot. We started the year with an art project where the students were given moldable clay and were invited to create anything they could imagine. Students created some simple items/creatures such as top hats, mushrooms and flowers to Spiderpigs and turtles. Some students even worked together to create stories that they shared with their classmates about their piece of art.

After this we worked on a STEM activity where the students had to design and create a device/machine that would be able to sort candy bags by weight. Students researched and worked on these for the majority of the quarter and some of the devices worked better then others but all groups of students were able to have accurate machines when sorting the candy. Students were allowed to use various supplies (cardboard, rubberbands, wood, beads, yarn and string to name a few) to create their device. Throughout the process some students saw that what they originally wanted for their design wasn’t going to work and had to redo their design. This worked with our Engineering by Design process. We had discussed and talked about how people who work on designing new products sometimes have to work through multiple designs before one works.

Next, we worked on debates. Students were able to choose their topics and had a classmate, who knew nothing about their topic, go against them. This challenged students to think on their feet if they were on the unprepared side, as well as the prepared side as they did not know what their opponent would say. The students enjoyed the fast pace of the debates and are looking forward to more debates in the coming quarters.

Lastly, we ended the quarter completing a couple of escape rooms from BreakoutEDU. Students had to work independently and together to solve the clues and be able to “escape” the room. This coming quarter we will be working on robotics, more Engineering by Design projects and working with 3D printers.