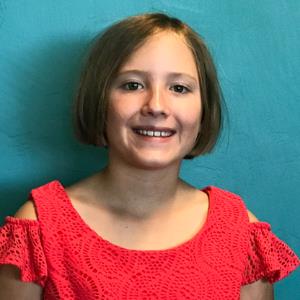 A rare encounter with a real Mandalorian taught one Dove Mountain student about the importance of kindness in action, encouraging her to also spread kindness wherever she goes.

Rori Divijak, a sixth grade student at Dove Mountain CSTEM School, recently had her feature story published in the local newspaper, Bear Essential News for Kids. In the article, she shared how she first met Jula Wren the Mandalorian, a local Tucsonan and a military veteran, at a local park. The Mandalorian’s goal is make Tucson a better place with one kind act at time while concealing his identity under his armor – a helmet. His acts of kindness included handing out Mandalorian patches, cookies and gift cards, as well joining Rori and her family playing softball at the park.

Congratulations to Rori for being featured, and keep spreading kindness wherever you go!

One day in early April my dad took my sisters and me to play softball at Joaquin Murrieta Park. As we were playing, a Mandalorian drove up on his motorcycle and asked if he could join us. Due to the COVID-19 we all wore masks as we took turns pitching, hitting and fielding. At the end of our practice, the Mandalorian gave us each a gift card and told us to be the kindness we wanted to see in the world.

It turns out we had met Jula the Mandalorian, who had just begun to spread kindness in Tucson. Jula got his Mandalorian name from a Star Wars name generator. Jula put in the name Wren because Sabine Wren was the leader of the Mandalore and Jula says, “She was such a true patriot and a True Mandalorian.” Jula chose to be a Mandalorian because he says it is a vessel to help him spread kindness while keeping his identity hidden. He also connects the phrase, “This is the way” to his service in the Army Infantry.

Jula the Mandalorian started giving out Mandalorian tactical patches to children to recruit foundlings. The mission on his Facebook page is, “To make my environment a better place.” It turns out Jula the Mandalorian started spreading his kindness in Tucson with our family. Jula has spent thousands of dollars of his own money to show kindness to others. He goes to grocery stores, coffee shops and other locations and meets kids and encourages them to spread kindness in our community. He rides around Tucson on his motorcycle and hands out gift cards, patches, and even Mandalorian cookies.

Jula goes wherever his gut takes him; he lets destiny guide him to where he is meant to go. He says that every patch that he hands out is passing along the Mandalorian way. If you have a patch and you are a foundling then you are part of Jula’s clan. Jula calls his clan the Western Mandalorian Rangers. When Jula makes you a foundling he asks that you keep spreading kindness whenever and wherever you go.

Jula is a military veteran and he turned his armor into Mandalorian armor. Just like the Mandalorian in the television show, Jula never takes off his helmet so his identity is unknown. Jula says,

“I keep my helmet on because I believe that kindness does not need a face. Rather it should be a behavior that should be exemplified by all.” Jula encourages kindness. Whether that kindness is just waving at someone or, like Jula, recruiting foundlings, that one act of kindness can go a long way. Even though Jula is keeping his identity a secret he says he is alright with someone figuring out that it is him.

In November, my family returned to Joaquin Murrieta Park to practice softball and we were able to meet Jula the Mandalorian again. He joined us and we all practiced softball and had lots of fun. That day Mandalorian gave us a cookie of The Child, a Mandalorian cookie, a gift card, and a Mandalorian tactical patch for each of us—we are now officially foundlings! Jula called us The Lost Foundlings because we were the first ones he recruited and now we have the patches to show that we are part of Western Mandalorian Rangers.

As the Mandalorians say, “This is the way!”

This article was originally published in the Bear Essential News December 2020 edition.